The stock and bond markets have both come under pressure in 2022 with each losing over 10% of their value.  This is rather unusual, as stocks and bonds tend to behave the opposite of each other.  However, there are cases when an event causes downward pressure to both, which has been the case for the past 4-6 months.  While there may be other factors impacting these markets, the main culprit has been inflation.  This document provides a background of the current markets and economic condition, and future expectations.  We also discuss the strategic allocation changes that Menninger & Associates has been implementing to our actively managed portfolios and portfolio models.

As of May 5th, the US stock market (as represented by the S&P 500) was down 12.59%, while the US aggregate bond market index was down 10.15%.  Thus, for the typical investor who is allocated to a combination of stocks and bonds, the portfolio returns were grim as there were few places to hide.

Thus far this year, we have seen a reversal in the divergence between growth stocks (down ~20%) and value stocks (down ~5%).  Growth stocks are typically those with high PE (price to earnings) ratios and are indicative of fast growing companies (e.g. - technology stocks and communication stocks) and typically have low (or no) dividends. Conversely, value stocks have lower PE ratios and typically represent mature companies that usually pay a significant dividend.  Until late 2021, the performance of growth stocks dwarfed their value counterparts by as much as 50% during a one-year period.

Meanwhile, the 40-year secular bond market rally may have officially ended in 2021.  In short, bond values behave the opposite of interest rates, and interest rates have been decreasing over the past 40 years.  Folks who remember those days (late 70’s and early 80’s) remember rampant inflation, bank savings accounts yielding over 15%, and mortgage rates nearing 20%.  Thus, as interest rates have steadily declined the past 40 years, bond values have steadily increased.  That has abruptly changed over the past six months.

The US aggregate bond index incorporates several types of bonds, nearly all of which have been getting punished lately.  That said, those with longer durations (maturity dates) fared much worse (down ~20%) than their shorter duration counterparts (down only ~2%)  .  This is directly (but inversely) related to the rapid rise in interest rates seen in the US over the past 4-6 months.

The rise in interest rates is due to high inflation, and these higher rates have also caused downward pressure on the stock markets.  Low inflation (~2%) is actually considered good for the economy, but inflation has been rising steadily since early 2021. Inflation, as measured by the Consumer Price Index (CPI), reached 8.5% in March 2022.  As seen in Figure 1, inflation has reached 40-year highs over the past several months.  As demonstrated by the graph below, inflation was tame from the mid 1990’s until 2021. 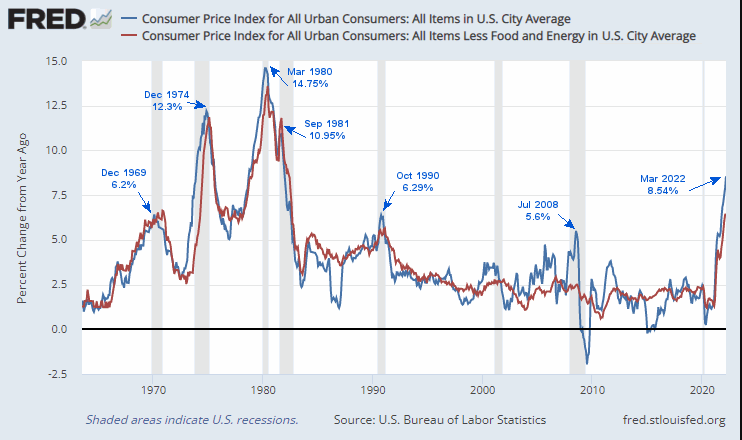 The inflation we’re seeing has been caused by a multitude of factors, such as:

The Federal Reserve (Fed) tries to control inflation by adjusting interest rates and/or controlling the amount of bonds it holds on its balance sheet.  To help spur economic growth, the Fed will be “dovish” by lowering interest rates and buying bonds like it did at the onset of the pandemic.  Once the Fed realized the economy was overheating and showing signs of inflation, it stopped its bond buying program and began to raise interest rates (“hawkish”).  The Fed raised rates by 0.25% in March 2022, another 0.5% in May, and is expected to raise rates another 0.5% in June.  A consensus of economists believes that rates will rise by a total of 2.50% before the end of this year.

This rapid rise in interest rates is prompting many opinions on the subject.  Many pundits believe that the Fed waited too long to begin raising rates, fueling inflation to 40-year highs.  Meanwhile, many of the same pundits are concerned that rapid rate increases could slow the economy too quickly and cause a recession.  These fears have transcended into a drop in the stock market.

Fundamentally, the value of a stock is based on its corporate earnings, earnings growth, dividend, and dividend growth.  Their daily fluctuations are based on investors’ perceived valuation of the stock’s ability to earn and grow profits in the future.  The current earnings season has been particularly bad for technology companies, which have contributed to the S&P 500’s third-worst start to the year in its history.  Further, a rise in interest rates will adversely impact growth stocks more than value stocks, further damaging the value of technology stocks. 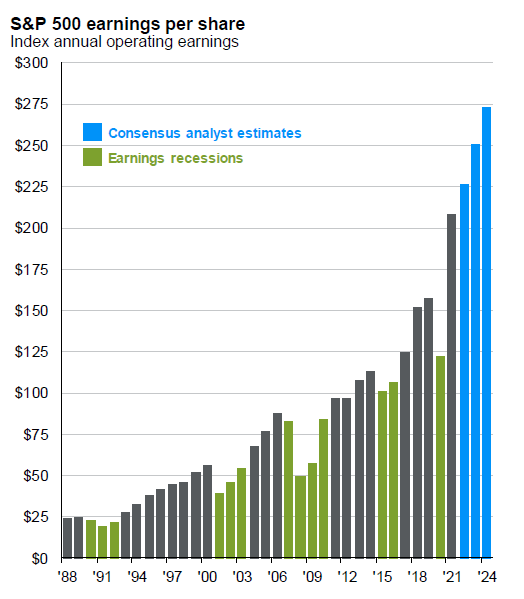 Since the markets have decreased in value, but company’s earnings are projected to continue growing, the forward PE ratio of the S&P 500 now stands at 17.5, much closer to the historical average than we have seen in recent years, (see Figure 3 below).  This implies that stocks are more fairly priced, and at a PE that may even be considered low given the historically low interest rate environment we are still in, despite the recent rise in rates. 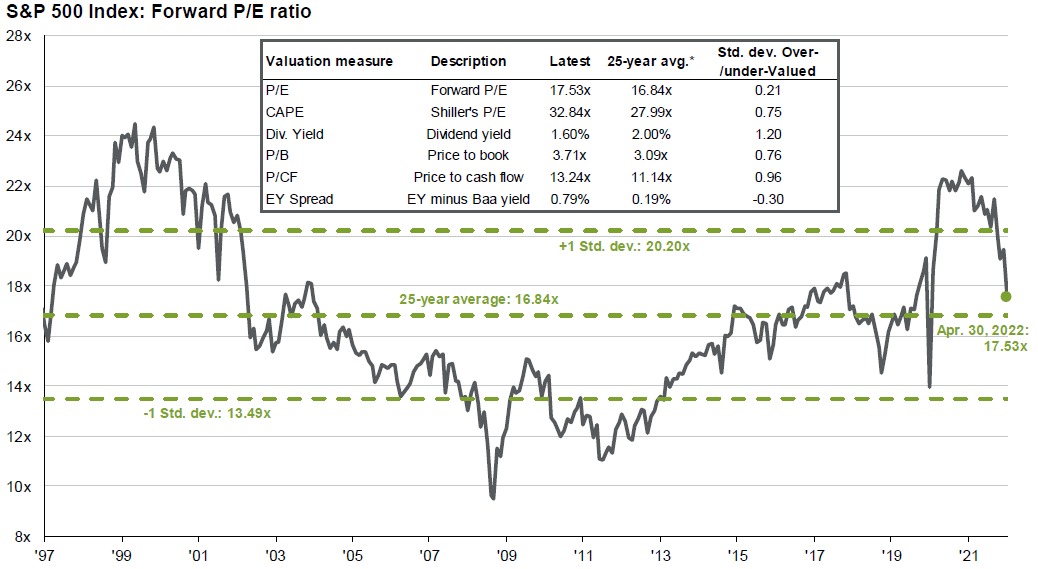 Returns and valuations by style 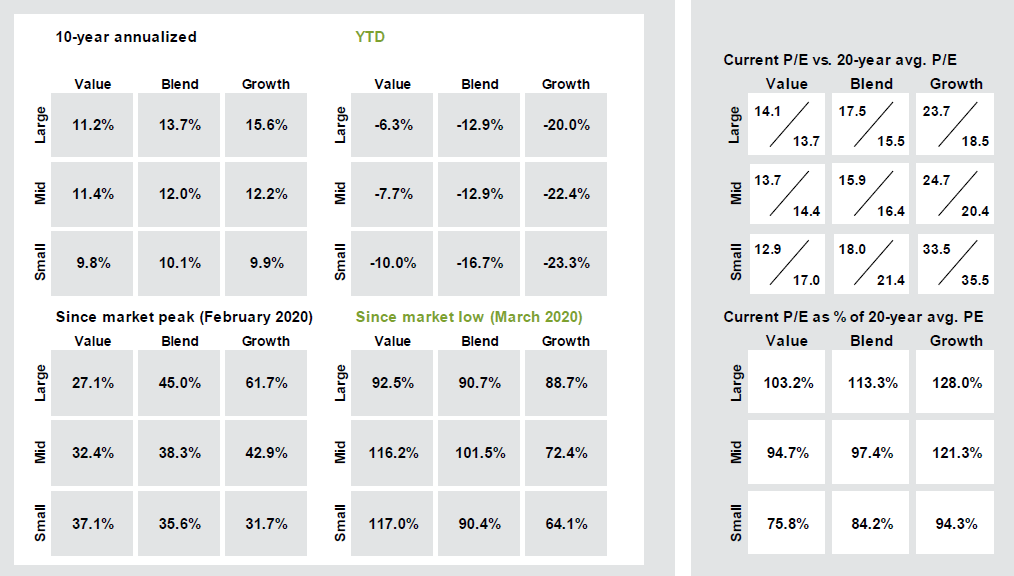 So where do we go from here?  Hmmm… where’s that crystal ball?  Clearly, there are risks that remain in the economy.  For example, will the Fed raise interest rates too much and too fast and cause the US to go into recession?  Will inflation continue to climb, or will it come back down again?  Will the Russia/Ukraine war escalate, and how will that impact the global economy?  These are great questions, and the answers will inevitably drive the US and global economies and stock markets for the remainder of 2022 and 2023.  Most pundits believe that inflation will decrease from its current levels, but will not come down to 2% for quite some time.  Many believe that inflation levels will drop to 3% - 4% by the end of 2022.  The Fed will be closely watching inflation.  Many economists believe the Fed will slow their pace of raising rates, and the US economy is strong enough to ward off recession.  As far as the Ukraine conflict, this does not currently have a huge impact on the US economy but could very well drive Europe into a recession.

As far as the stock markets, there are still many economists that believe we will finish 2022 positive.  This means we would need to gain nearly 15% to recover current losses.  The bond markets may have seen their worst, and institutional investors are beginning to see value with their higher yields.  As noted earlier, stock valuations indicate they are no longer expensive and may arguably be considered a good value right now.  Just because something is a good value, doesn't mean there will be buyers.  In other words, we could continue to experience more pull backs from here, but when it finally recovers, history has shown it does so very quickly.  Do you want to be on the train when it leaves the station?

Volatile markets are the friend of the patient investor.  Market drops allow fund managers to buy quality companies “on sale.”  Drops allow companies with stock buy backs to purchase more shares, decreasing the share count, and thus increasing earnings per share.  Drops provide rebalancing opportunities to “buy low.”  Market drops may not feel good at the time, but can be beneficial for portfolios in the long run.

At the start of the year, our model portfolios were slightly over weighted to stocks.  For example, the 60/40 stock/bond portfolio held about 65% stocks and 35% bonds.  At the time, it was less of a conviction towards stocks than a negative sentiment towards bonds.  Since the beginning of the year, we have made multiple allocation changes to our portfolios to pare back risk by reducing exposure to stocks, shifting from overweight growth stocks to value stocks and paring back on interest rate sensitivity by moving toward short duration bonds and even cash.

Menninger & Associates compares the performance (net of fees) of our portfolio models to the Vanguard target date retirement model portfolios that have a similar composition.  In the earlier part of the year, our over exposure to growth stocks caused us to lag our benchmarks, but the changes we made have closed that gap and even helped us outperform our benchmark for the moderate and conservative portfolios.  Unfortunately, even though we have performed “better” the past few months than our peers, we are obviously very disappointed with the overall decrease in values of the portfolios.

More recently, our portfolio adjustments resulted in moving additional assets out of growth stocks and deploying that money, as well as a portion of the cash, into largely large cap value stocks and some mid cap value stocks.  In the non-qualified (taxable) portfolios, we also liquidated about half of the tax-free municipal bonds to harvest capital losses and will deploy the cash back into similar investments in the near future as we continue to watch that segment of the market.

We understand that the markets have been very challenging in 2022 and they have made a big impact on our client’s portfolio values.  The Menninger & Associates Investment Committee closely monitors market and economic conditions and the investment performance within our portfolios.  We remain prepared to act promptly and prudently as needed during volatile markets.  This sometimes turns out to be simply staying the course, but we won’t hesitate to adjust when necessary.  As always, if you have any questions or concerns, please do not hesitate to call us.

Securities and advisory services are offered through Cetera Advisor Networks, LLC, member FINRA/SIPC, a broker-dealer and registered investment adviser.  Cetera is under separate ownership from any other named entity.  The Bloomberg Barclays US Aggregate Bond Index, which was originally called the Lehman Aggregate Bond The Bloomberg Barclays US Aggregate Bond Index, which was originally called the Lehman Aggregate Bond Index, is a broad based flagship benchmark that measures the investment grade, US dollar-denominated, fixed-rate taxable bond market. The index includes Treasuries, government -related and corporate debt securities, MBS (agency fixed-rate and hybrid ARM pass-throughs), ABS and CMBS (agency and non-agency) debt securities that are rated at least Baa3 by Moody's and BBB- by S&P. Taxable municipals, including Build America bonds and a small amount of foreign bonds traded in U.S. markets are also included. Eligible bonds must have at least one year until final maturity, but in practice the index holdings has a fluctuating average life of around 8.25 years. This total return index, created in 1986 with history backfilled to January 1, 1976, is unhedged and rebalances monthly.  The views stated are not necessarily the opinion of Cetera and should not be construed directly or indirectly as an offer to buy or sell any securities mentioned herein. Due to volatility within the markets mentioned, opinions are subject to change without notice. Information is based on sources believed to be reliable; however, their accuracy or completeness cannot be guaranteed. Past performance does not guarantee future results. Investors cannot invest directly in indexes. The performance of any index is not indicative of the performance of any investment and does not take into account the effects of inflation and the fees and expenses associated with investing.