The US stock markets were mixed last week with the Dow (-0.2%), NASDAQ (+3.7%) and S&P 500 (+1.8%).  Diversified bond funds also gained about 0.3% as the US government continues its bond buyback program.  The stock market movements last week were mostly driven by the technology stocks, as Apple and Amazon delivered fantastic earnings reports Thursday night.  While delivering good earnings, Apple also announced a 4:1 stock split, so the combined news caused the stock to surge 10% last Friday to another record high.  On Wednesday, the Fed announced that it will continue to support the economy, particularly on the heels of the largest GDP loss in history, which was reported at a 32.9% loss for the second quarter.  That’s remarkable, but not unexpected, as the consensus was expecting a loss of 34.7%.  So, the markets responded favorably because that was “better” than expected.  Better?  Really?  That said, the stock markets are considered leading indicators, so they are “predicting” better days to come 3 – 6 months ahead.

The NASDAQ also continues to reach new highs, and to a great extent because of the big-name technology stocks, such as Microsoft, Apple, Amazon, Facebook, and Google, which also happen to be the largest five companies in the S&P 500 index.  This is a phenomenon I noted in 2018, as those stocks now represent nearly half of the NASDAQ index and 25% of the S&P 500 (see the first chart below).  This is very important as investors tend to think that the S&P 500 is a diverse group of 500 stocks.  If they were evenly weighted, then those five stocks would represent less than 1% of the index.  Another item of note, as represented by the second chart below, is that the S&P 500 has gained 2% YTD, yet those 5 stocks are up 35%, while the remaining 495 stocks are actually down 5%.  I am not predicting this, but if those five stocks were to take a massive hit like tech stocks did in 2000, this could have some pretty ugly effects on the NASDAQ and S&P 500 indices. 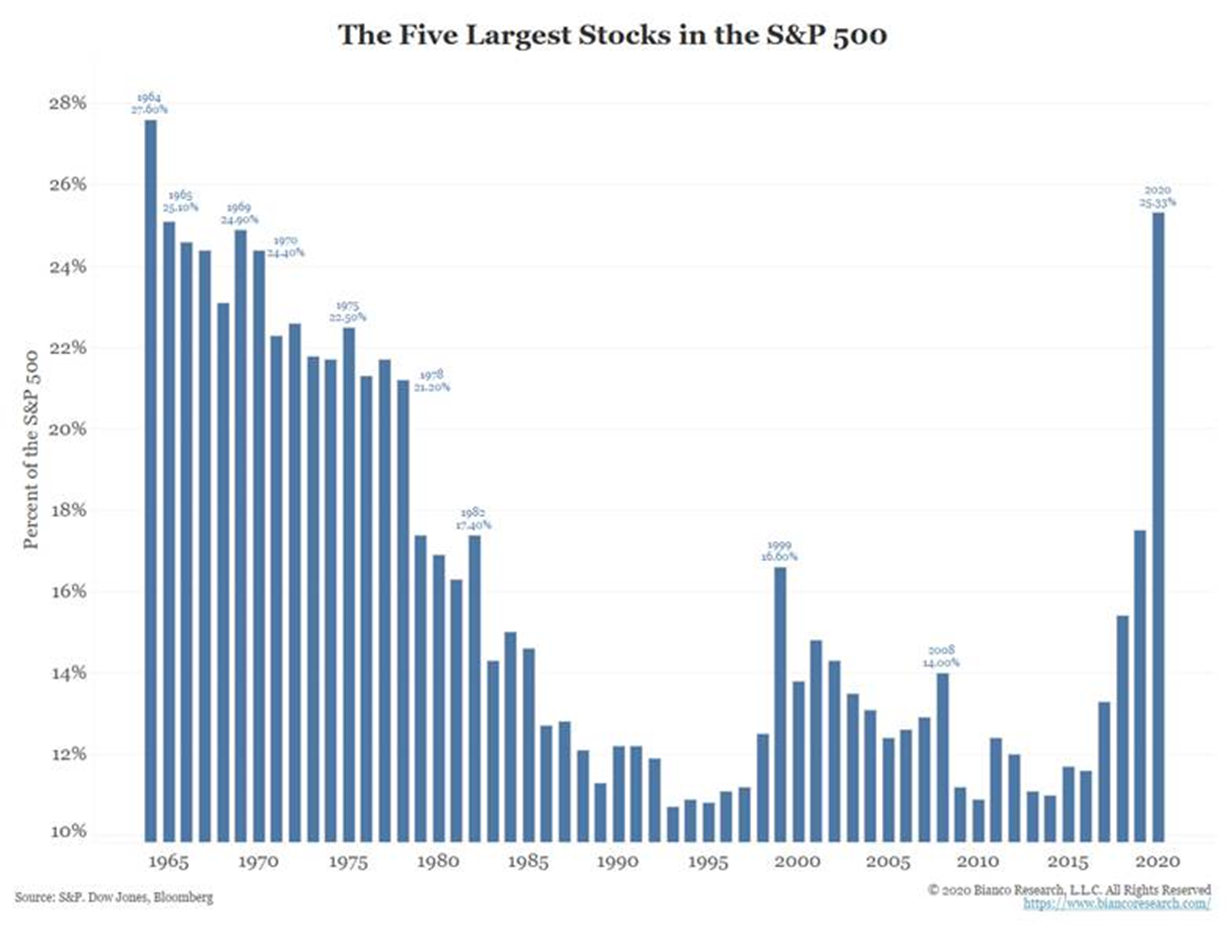 Topics discussed and disclosures displayed in articles dated prior to November 28, 2022 reflect the requirements from previous Broker-Dealers. Please see the footer of the website for how services are currently provided.